The Auxiliary Power Unit (APU) is a self-contained unit that makes the aircraft independent of
external pneumatic and electrical power supplies.

‐ It supplies bleed air for air conditioning, thus avoiding a reduction in engine thrust caused by the
use of engine bleed air for this purpose when optimum aircraft performance is required.

The APU may obtain power for starting from the aircraft's batteries alone or in combination with the
external power, or from ground service.

APU starting is permitted throughout the normal flight envelope. 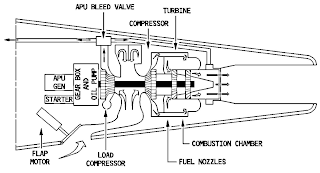 The Electronic Control Box (ECB) is a full-authority digital electronic controller that performs the bulk
of the APU system logic for all modes of engine operation, such as :
‐ Sequences the start and monitors it.
‐ Monitors speed and temperature.
‐ Monitors bleed air.
‐ Sequences the shutdown.
‐ Controls the automatic shutdown.

STARTER
The ECB controls the electric starter.
The starter engages if the air intake is fully open and the
MASTER SW and the START pushbutton are ON.

The left fuel feed line supplies the APU.
The required pressure is normally available from tank pumps.
If pressure is not available (batteries only or pumps off) the APU FUEL PUMP starts automatically.
The ECB controls the fuel flow.
OIL SYSTEM

The IGVs control bleed air flow, and a fuel-pressure-powered actuator positions the IGVs.
The ECB controls the actuator in response to aircraft demand.

The APU may run without cockpit crew supervision when the aircraft is on the ground. In case of fire
in the APU compartment :
‐ APU fire warnings operate in the cockpit.
‐ A horn in the nose gear bay sounds.
‐ The AVAIL light goes out.
‐ The FAULT light in the MASTER SW lights up.
‐ The APU shuts down.
‐ The APU fire extinguisher discharges.

(1) MASTER SW pb-sw
This switch controls the electrical power supply for the operation of the APU and its protective features.
It also controls the starting and shutdown sequences.

ON : The blue ON light comes on.
Electric power goes to the APU system; the ECB performs a power-up test.
The APU air intake flap opens.
The APU fuel isolation valve opens.
If no fuel tank pump is running, the APU fuel pump operates.
If the aircraft has ground power or main generator power, the APU page appears on the ECAM display.

OFF : Manual shutdown sequence.
‐ The ON light on the MASTER SW pb-sw, and the AVAIL light on the START pb, go out.
‐ The APU keeps running for a cooling period of 120 s at N 100 % speed.
‐ At 7 % the air inlet flap closes.
FAULT lt : This amber light comes on, and a caution appears on ECAM, when an automatic
APU shutdown occurs, which happens in case of:
- Fire (on ground only)
- Air inlet flap not open
- Overspeed
- No acceleration
- Slow start
- EGT overtemperature
- No flame
- Underspeed
- Reverse flow
- Low oil pressure
- High oil temperature
- DC power loss. (BAT OFF when aircraft on batteries only)
- ECB failure
- Loss of overspeed protection

ON : Blue ON light comes on.
‐ When the flap is completely open, the APU starter is energized.
‐ 1.5 s after the starter is energized, the ignition is turned ON.
‐ When N = 55 %. The APU starter is de-energized. The ignition is turned off.
‐ 2 s after N reached 95 %, or when N is above 99.5 %:
* The ON light on the START pb goes out.
* The APU may now supply bleed air and electrical power to the aircraft systems.
‐ 10 s later, the APU page disappears from the ECAM display. 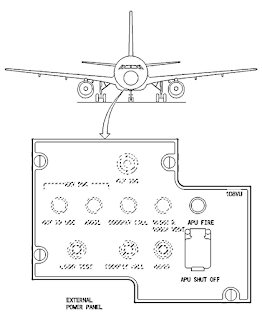 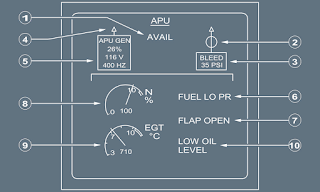 (3) APU bleed air pressure
This box displays the relative bleed air pressure in green.
It shows an amber XX when the ADIRS1 is not available or selected OFF or the data from the
ECB are invalid or not transmitted.

(6) FUEL LO PR - Displayed in amber if the APU fuel pressure gets low. 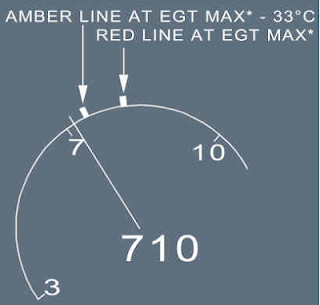 * ECB calculates EGT MAX and transmits it to the ECAM. It is a function of N duringstart, and a function of ambient
temperature when the APU is running.
Maximum EGT during start: 982 °C.
Maximum EGT with APU running:
‐ 682 °C during at least 5 s.
‐ or, 700 °C to 742 °C depending on the ambient temperature.
(10) LOW OIL LEVEL
Adv: Displayed if the ECB detects a low APU oil lvl when the acft is on the gnd and the APU is not running.

APU starts or shutdowns are permitted during refuel/defuel procedures. If it is necessary to operate
the APU, the limits that follow apply :

a. An APU start is not permitted during a refuel/defuel procedure if the APU has failed to start or an
automatic shutdown has occured

b. A normal APU shutdown must be completed if a fuel spill has occured during the refuel defuel
procedure.

‐ Electrical transients (caused by switching among the APU, the external and the engine electrical
supply) during automatic refueling may stop the process. If the automatic refueling process is
stopped, it is necessary to re-enter the Preselected Fuel Quantity.
Postado por R BUSSI às 12:40